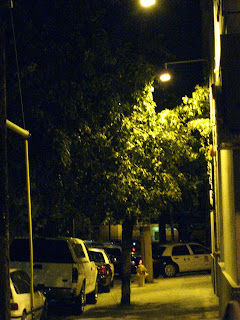 I've lived and worked downtown since 1993, and never have I felt threatened, scared, or frightened to be here. Before I started my business in 2000, my office was at Central Library, so I dutifully walked a four-mile trip every weekday, leaving each morning at 7 AM and returning home around 7 PM. I was one of the few in those days who walked downtown at night.

Last night, I had an interesting experience. I have two dogs that I walk thrice-daily, the last walk typically around 9 or 10 PM. We took a familiar route, and stopped for a moment so my dogs could tinkle in the grass near a four-story office structure on the north side of my loft building.

We were about four feet from its glass entrance when the left door suddenly shattered. I was on the cell phone, talking to my boyfriend. It seemed like his call disconnected around the same time of a flash of something, glass breaking, and the noise of it all. I looked across the street -- no movement, no people, no sounds ... parked cars on both sides of the road, an empty undeveloped loft building, and the Daily Journal, dark for the evening, and NO ONE. Now, the First Street bridge is overhead, beyond those two buildings, but nothing ... quiet, emptiness. In those two seconds of assessing the situation, I quickly moved my dogs west up the street, staying out of whatever I then thought might 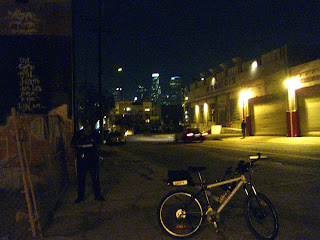 be coming out of the office structure.

"Craaassh" -- more glass breaking, so I scooted my mutts north across the street to see what was coming after us, if anything. Nothing ... I called an off-duty police officer friend of mine -- "Call 911," she said. Hhmm? Nothing was happened, but regardless, she said, "The building's now been compromised. Someone might burglarize the place if that's not what's happening now."

Within five minutes of calling 911, a police cruiser quickly drove up, dimmed the headlights, and cautiously approached the building. In the meantime, I called another friend -- this time, one who I knew rented a work space in the office structure. He and his wife joined me on the corner, when yet another, then another, and many more police cruisers surrounded the place. I think there were finally 12 police cruisers plus four canine units, and at the end, a helicopter.

The images in this post were from down the street while I waited patiently with my dogs next to an Arts District security guard on his bicycle as a thorough search was conducted on each floor of the office structure and the surrounding neighborhood.

When it was all said and done, they told me that it was probably stray shots from a BB gun, another type of firearm or some other sort of projectile, though no shells were found. 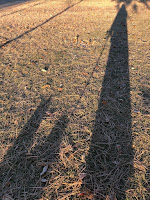